This Thursday a list presented of European deputies who support the international declaration in favour of the freedom of Arnaldo Otegi and bringing Basque political prisoners back to the Basque Country. At the initiative of the Basque Friendship Group (a support group in the European Parliament for the peace process in the Basque Country) 24 deputies representing three parliamentary groups (GUE/NGL, EFA-Greens, ECR) have pointed out the importance of releasing the general secretary of SORTU and bringing back Basque prisoners as “key for advancing in the peace process”.

The head of the delegation of Sinn Fein in the European Parliament affirmed that “the imprisonment of Arnaldo Otegi for political motives and although ETA had made their historical announcement of the cessation of their armed activities, the Spanish maintains the leader of the Abertzale Left in prison”. Together with that Anderson has expressed that “the importance that prisoners play in every peace process in securing and sustaining it”, and put as an example the Irish peace process.

The European deputy of N-VA Mark Demesmaeker recalled that the declaration promoted by a numerous group of international personalities and presented on 24 March in the European Parliament has already received support from different sectors and corners of the world. Demesmaeker has underscored that “while the European has played and continues to play an essential role in various conflicts outside of its borders, they are quiet about human rights violations which are produced in countries inside the Union”. He remarked on the importance of that any peace process must be based “on mutual respect and not on a scheme of victors and vanquished”.

The European deputy of ERC-MEC, Ernest Maragall, expressed thanks to the work of the Basque Friendship Group at the hour of promoting initiatives in favour of the peace process. Maragall also spoke in the name of Josep-Maria Terricabras, European deputy for ERC, to point out that, maintaining Arnaldo Otegi in prison, “The Spanish state demonstrates the vision it has of justice, very inadequate to the scales of the European Union”. Also, he indicated that “the Spanish state can’t support the idea of releasing Arnaldo Otegi, since that would set off a great wave of freedom and hope. It’s too big of a symbol and his release would obey what the freedom of the Basque people represents”. Ernest Maragall has recalled that today is an important day since it is the 75th anniversary of the shooting of President Campanys on the part of Francoism.

At the end of the press conference, responding to journalists’ questions, Josu Juaristi, has remarked that “we are facing and unheard of situation. Imprisonment for political reasons is reprehensible in any circumstance, but in this context, with a historical opportunity to solidify peace and resolve the conflict, it is even more incomprehensible, unacceptable and scandalous. It represents putting on the breaks for peace because it makes the resolution of the conflict more difficult instead of helping”. At the end, he stated that this Saturday, 17 October, at 5:30pm, there will be a demonstration in Donostia under the slogan, “Arnaldo Askato, Politika Askatu”. 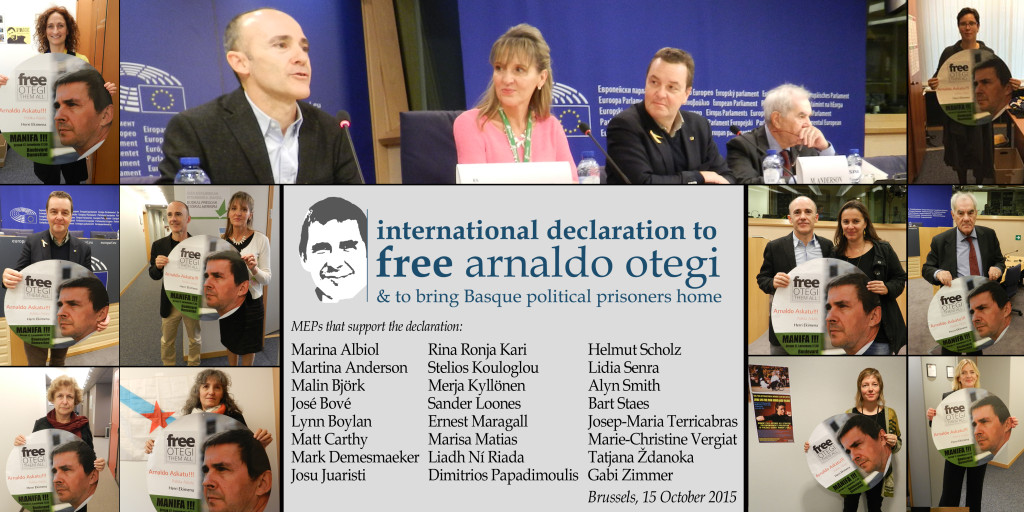