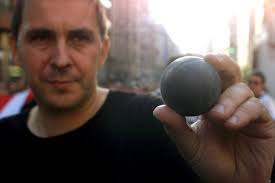 In 1986, the then President of the USSR, Mikhail Gorbachev presented an audacious proposal of disarmament that was made public on January 15th of that same year. That proposal broke with the logic of the Cold War and made enormously uncomfortable the dominant elites of the Capitalist states.

The German Chancellor Helmut Kohl, making himself the spokesperson of these sectors of the Western oligarchy, had the audacity in 1987 of defining the peace proposal of the Soviet president as nothing than a “Goebbelsian” campaign and in the USA in 1990 the National Security Advisor for George H. W. Bush declared the following: “Mr. Gorbachev is only interested in creating divisions in the Western Block and thinks that the best way to do it is through a peace offensive.”

Definitely, PEACE is not what the financial oligarchies want.

I mention this episode at the end of the decade of the 80’s because I am totally persuaded that the commitment to PEACE from ETA in our country has generated great discomfort in the financial-oligarchical sectors which was designed and led (and they continue doing so) the so-called Spanish Political Transition.

Because there is a problem in the Spanish centres of political power, but also in the media and economic: too many people think that with a low-intensity ETA and an Abertzale Left with limited rights is better than the end of ETA because while ETA exists the Basque Country will be captive, it won’t be able to move. The idea that underlies this thought is that it is better for there not to be an end to violence than a bad ending.

After so many years, “antiterrorism” is a political and economic business and there are people who fear its end. This is the reason for why the state refuses over and over again the hand extended to them… and they will continue doing so… let’s not be deceived. 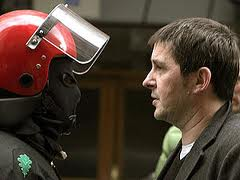 It’s well known that the auguries had a great transcendence in the social and political life of ancient Rome (for example they always consulted the augurs before beginning a battle or a war). For example, they say that the general Appius Claudio was pushed to not join battle against Carthage because the sacred chickens didn’t want to eat what constituted a very bad omen. Facing such auguries, the exalted general ordered the birds to be thrown into the sea “if they don’t want to eat, let them drink!”… Although the truth is that he was defeated in that battle that he so much wanted to engage.

Today the modern economic elites have been carrying out a ferocious battle (growing in this past five-year period) to destroy and disappear the rights conquered by the workers’ movement. For that there are times that they have to keep up appearances and they try to make us believe that their decisions need the authorization of the modern augurs: Governments and Parliaments. Then, following the example of CAESAR, who being a prudent man mixed worms with the wheat to assure himself that the sacred chickens would eat… He mixed his demands with worm-offerings (like a splendid economic future in some Board of Directors) so that their demands would be duly designated as “democratically” legitimate.

Of course, for those of us who don’t accept it, they follow the example of Appius Claudio and throw us into a sea grid work. But what they don’t know is that as he also ended up losing that battle, not just because for a long time now we have learned to swim but also because our political diet is incompatible with any other type of worms and maggot nests. 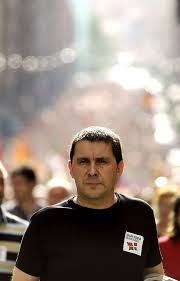 As the Church in the east chose Greek on the middle age, the Church in Rome chose Latin. On that context, Charlemagne’s contemporary monks, Cirilo and Metodio decided to spread the gospel on the native tongue of their region, Slavic.

That decisions angered Germanic clergymen… and they decide to brung their protest to the Pope, explaining thus their reasons: When Jesus was nailed to the cross there were only three languages on it, Greek, Latin and Hebraic, and therefore those were the only sacred languages. However the Pope (Juan VIII) approved the Slavic experience.
Those debates have little effect nowadays, at least in the Basque Country… as the last scientific researches have proven the Nazaret Prophet didn’t have as a role to inspire any gospel… but the Spanish and French Constitutions… and therefore here Spanish and French are the only sacred languages… because God ordered so. 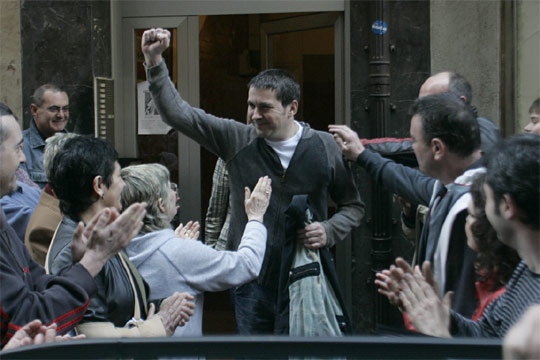 If someone wants to know how we carry on being activists and assume our activism despite this new sentence * which is purely political, those two quotes should give an answer:

“But one who casts his lot with an advanced party must be prepared to spend a number of years in prison, and he need not grudge it. He feels that even during his imprisonment he remains not quite an inactive part of the stream of human progress which Spreads and strenghtens the ideas which are dear to him” Pyotr Kropotkin, Memoirs of a Revolutionist)

As we previously said in an interview done by Al Jazeera: “They can extend our imprisonment because it’s in their hands, but they won’t be able to stop our people from achieving their right to self-determination nor would they stop the ideas that we cherish so much: independence and socialism. Ideas that are carried out by most of our men and women who work and live in our ancient Basque Country.

There aren’t any invencible dragons! It’s time of cherries!