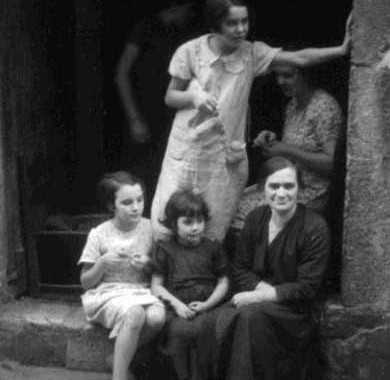 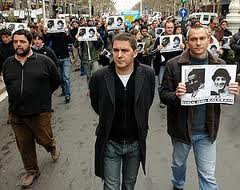 They have woken up early, cold can be felt.
Good morning darling, says her mum with a loving look.
She has taken breakfast slowly, cleaned her face, dressed up…
Meanwhile her mum has taken the blue and white bag bought in the shop and then they have left the house turning the key three times.
They have arrived to the square without escaping the nets of dreams.
Holding her mum’s hand she listens the good mornings shared by those that take the same bus every week. Kids don’t have the energy for such things.
The journey is too long, heavy, tiring— and mum tries to put the kid to sleep, and she makes it… but only after a few kilometres, she opens her eyes and asks: How far yet mum? … a little yet darling… sleep a little bit. The same question and same answer will be heard a number of times during the journey.
They have finally arrived. From the cold of the Basque Country to the light and warm of Al-Andalus… They have quickly entered the visit, she has shown dad the last drawing made on the school, and told him, proudly that she takes care of mum, and that she is telling him that she behaves, when she has looked his dad on the eyes and asked. When are you coming home dad?
And the prison officer has entered the room and said “visit is over” and when listening they have given the last kisses, the last smiles… I love you, says the prisoner on the last instant… once in the street again, they have gone to the bus, everyone has come out of the short visit happy, and sad, full of energy… and tired… on the way back we will listen again, how far yet? How much time yet?… and while thinking on the visit a smile will come to her lips.

When the news of your death struck us
I’m sure all of us in prison thought the same:
it could have been me, it could have been any of us!
And we made your parents, friend and beloved ours.
And now, when your body goes amongst ikurrinas
when I saw on TV, the violent silence of people has touched me…
And I have imagined the leaders of the Abertzale Left repeating
The words said by Palmiro Togliatti when the secretary general of the Italian Communist Party
was close to death after an attack on him, with love, with Responsibility! Tell our people to stay calm
When I have switched off the TV, I’ve listenned to ALBINONI’s addagio in your honour, I’ve remembered
something a friend told me sometime ago: The Basque Country is a Country condemned to death!
And as I did then, with more reason I want to tell you: No!
The Basque Country is a Country, a people, that lost its fear of death long ago..
which loves live…
as you do, as we do…

And in this way we can make a never ending list… and so in Seville stabbing someone to death is paid with 12 years in prison and burning a bus in Donostia it’s 15 years (of COMPLETE fulfilment).
Justice is equal for everyone, they say. These are the facts, you can make your own conclusions.

*Arkaitz Bellon, a 36 year-old Basque prisoner died in jail a few months before his release. He was sentenced to 13 years in prison for being accused of burning a local bus.