The event began with the presentation of the campaign and the reading of a letter sent by Otegi himself from the Logroño prison, the reading of the letter was made by the Basque – Ecuadoran filmmaker Amaia Merino, co-director, together with her brother Aitor, of “Asier eta Biok”.

In his missive Otegi sent “an infinite appreciation for your solidarity” to the signers and underscored the special importance of it since in the words of Otegi “in recent history our peoples’ have crossed in a tragic manner” and remembering the deportations of Etxegarai, Aldana and Etxebeste and the later kidnapping and torture of the first two and also that an armed action by the ETA organization took forever the lives of the Ecuadoran citizens Carlos Alonso Palate and Diego Armando Estacio. Otegi also lamented “from the bottom of my heart these tragic acts and the irreparable damage that they caused”. 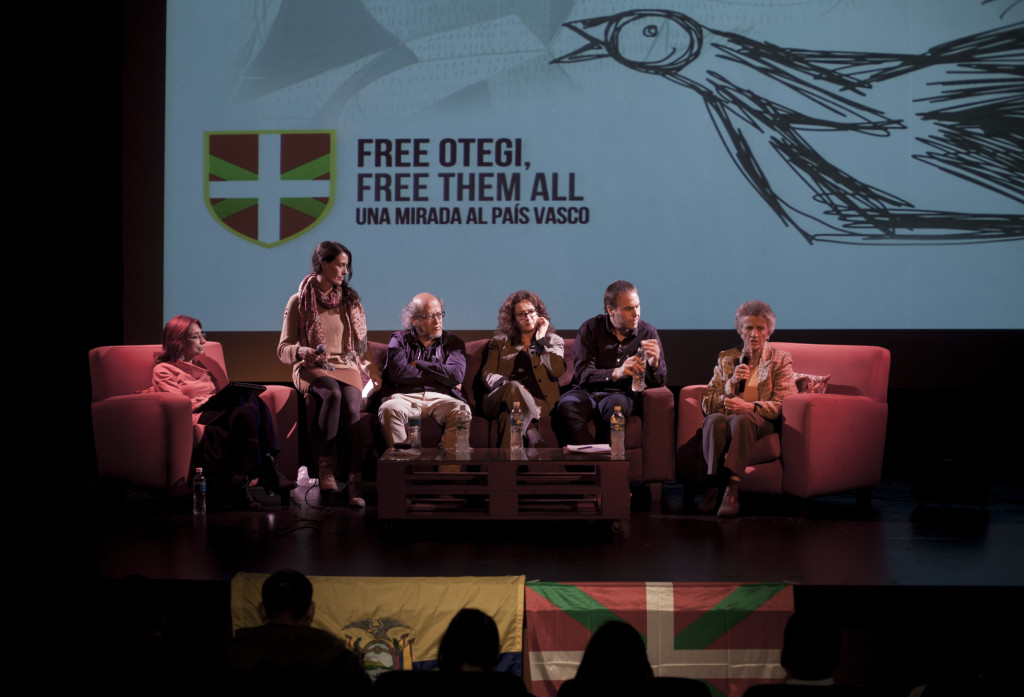 Apart from Merina a representation of the signers intervened in the act, beginning with the member of the Assembly Maria Agusta Calle, who defended the necessity of peace and emphasised Latin America as a territory of Peace and mutual understanding. Maria Agusta Calle, as president of the National Coordinating Committee of Solidarity with Cuba and committed with the struggle of the Cuban 5 underscored the importance of maintaining these campaigns at an international level as a method of denouncing and pressure.

The delegate of Sortu for America, Asier Altuna, invited to the act by the organizers, Ecuador for Peace in the Basque Country, gave a small summary of the new political time in the Basque Country and stressed the figure of Otegi as the promoter of this strategy and recalled the importance and recalled the importance of the event which took place in Ecuador this past January.

The director of the Ecumenical Centre of Human Rights of Ecuador, Elsie Monge, recalled
the three Basques who were confined in Ecuador in the 80’s in the time of Febres Cordero, Aldana Etxebeste and Etxegarai. With regard to those facts and from her experience defended the necessity of resolving the Basque conflict, and of all political conflicts through dialogue.

The architect Handel Guayasamin, also defended negotiation and dialogue and took advantage of his intervention to denounce the attitude of the Spanish government regarding peace in the Basque Country, to which he added the necessity of building a culture of Peace.

Finally, Eulalia Flor, recently arrived from the Basque Country, gave those present a first-hand account of the situation from an Ecuadoran perspective.

The list of 29 Ecuadoran signers gathered such diverse support as the former President of Ecuador Rodrigo Borja, the former Interior Minister, Alfredo Vera, and former members of the guerilla movement Alfredo vive, Carajo!, as well as filmmaker and musicians and family members of the passed away artist Osvaldo Guayasamin and personalities related to his foundation.

The support is complemented by men of letters such as the director of The Telegraph newspaper Orlando Perez or the writer and president of the Ecuadoran Cultural Centre, Raul Perez Torres. And active political personalities such as the Deputy Minister of Justice, Rosa Mireya Cardenas and various members of the Assembly from diverse parties.

The act of presentation of the signers has been the first event of the film cycle “Commitment to Peace. Free Otegi! Free Them All! A look at the Basque Country”, which held the projection of the Basque films “Asier eta Biok”, “Barrura begiratzeko leihoak” and “Echeveberriatik Etxeberriara”.